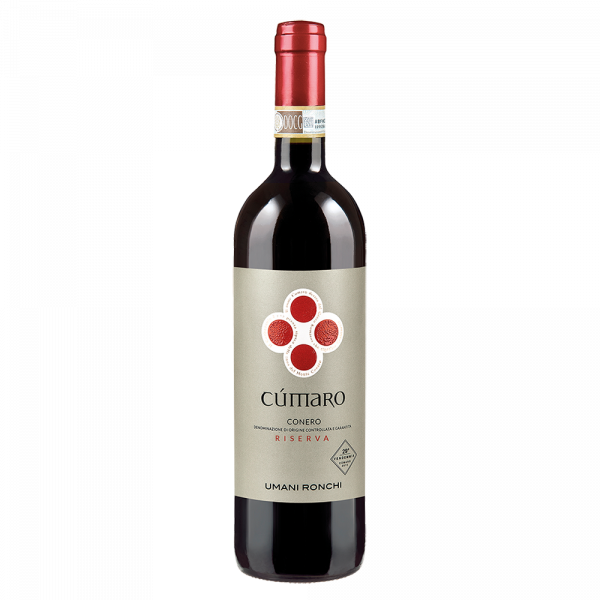 Cùmaro is one of the most important wines in the story of Umani Ronchi, and it can also be numbered among the founder members of the family of fine wines from the Conero area.

Cùmaro is one of the most important wines in the story of Umani Ronchi, and it can also be numbered among the founder members of the family of fine wines from the Conero area. It was created in the mid eighties to celebrate the Montepulciano variety of vine, and an area close to the sea with highly calcareous soils, using methods based on very strict selection of grapes in the vineyard and what were, at least for then, modern techniques of vinification and ageing. The name Cùmaro is a tribute to Mount Conero, komaros in Greek, which means ‘arbutus’: an ever‐ green shrub which grows freely in its woodlands. Since 2004 the wine has been entitled to the appellation

The vineyard from which Cùmaro originates is situated on the edge of the municipality of Osimo, facing south‐east, at a height of about 150‐200 meters above sea level. The terrain, which started out as marine formations from the Pleiocene‐Pleistocene era, consists of very deep, chalky loams soils. The yield is kept within strict limits by very close pruning and targeted thinning, and can vary from five to 6‐8 tons per hectare according to the season.

The grapes are picked by hand, and collected and transported in boxes. Montepulciano is a fairly late variety. Usually, harvest takes place in October, when the grapes have reached peak condition with an advanced degree of phenolic ripening.

Serving glass
A large glass, with a fairly broad body. This allows the correct oxygenation of red wines which have had
long ageing in bottle and whose tannins have taken on a softer character, developing complex tertiary
aromas which will be well‐concentrated in the narrower opening of the glass.
Pairings
A fine companion for rare‐cooked red meat, game‐birds and mature cheese.
Ideal serving temperature 16‐18°C

The grapes are destalked and lightly crushed, then fermented at 27‐29°C in steel fermentation tanks for 12‐14 days with natural yeasts. Subsequently,

Subsequently, the wine moves on to the malolactic fermentation stage, at the end of which it is aged in 225 litre oak barriques for a period of 12‐14 months. After bottling, Cùmaro is left to age further, in a temperature‐controlled environment, for about